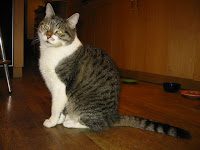 Today, with a bit of heart-wrenching assistance on the home front, Shadow met his end. At age 18, his body was breaking down on several fronts, with multiple severe conditions that required a very high level of active daily care - seemingly inadequate, however, so far as we could tell, to give him a decent quality of life. At the end he had diabetes, a thyroid problem, bladder problems, kidney disease, was unsteady, and may have had bad arthritis. He would still eat, but slept and rested the remainder of the time, meowing plaintively in an uncharacteristic way and sometimes seemingly trying to keep himself awake, which I've never seen from a cat before.

He was one of the nicest and kindest creatures of any species that I have ever known. I'm not sure our species entirely deserves his extremely positive view of us - although I suppose his experiences with us were pretty uniformly good.

I first met him in a men's clothing store that was having a closing sale. We made friends right away, which I must say wasn't hard to do, and he actually was following me around the store on a short acquaintance. He made us all very happy for eight years, and I just wish we could have known him longer.

Extremely mellow and easygoing at all times, except that he sometimes felt strongly about our food. Here you can see him in happier times, ingeniously using his front paw to extract milk that had been left for a minute in a glass on the table. 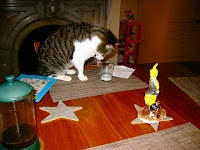 Posted by Daniel Shaviro at 2:00 PM