I have completed a first draft, except for the conclusion, of a brief article entitled "The Economics of Tax Law" that was commissioned from me (with said title attached) as a chapter in the forthcoming Oxford Handbook of Law and Economics.  It's a good thing that I have already gotten this far, since I understand January 15 to be the preferred due date.  (My contract says June 15, but that may just be the non-negotiable drop-dead date when the editors would give up and move on.)

Also making it good that I have only the conclusion left are considerations of length.  I'm at 8,728 words, including footnotes and bibliography, and am enjoined not to exceed 10,000.

Obviously, the economics of tax law is a rather large topic to cover in so little space.  The piece accordingly is a rather high-altitude tour, ranging from optimal income taxation, to why and when tax neutrality promotes efficiency, to the nature of the problems posed for the income tax system by the realization requirement, to the income versus consumption tax debate, to why we may feel enjoined to tax corporate income at the entity level (and what adverse consequences this has), to briefly discussng the perennial, though generally non-actionable, popularity of 1986-style tax reform.

I suppose I will post in on SSRN early in the new year.  While it certainly doesn't break new ground (nor should it), I am hoping to feel good about it as a swift overview.
Posted by Daniel Shaviro at 5:22 PM No comments:

A sense of relief

Last Thursday I taught my last class of the semester.  I won't be back in the classroom until Tuesday, January 21, when Alan Auerbach and I will be doing the first session of the 2014 NYU Tax Policy Colloquium.

That makes this week the very week when I would have had ACL surgery, if I had decided to go under the knife for purposes of fixing my right knee.  The timing idea, had I gone ahead, was to finish fall classes, and then maximize the recovery time before I am next scheduled to teach a class.  I was told that I'd need at least four weeks to get back in the classroom, but the more the better.  I could also expect six grueling months before I'd be largely recovered as a matter of light daily activity, and probably twelve months before I could try anything as rigorous as tennis.

I suffered the injury at the tail end of April.  My first thought was that I definitely wanted the surgery, so I could be physically whole and (among other things) get back on the tennis court.  This was accompanied, however, by a queasy sense that getting surgery at my age just to play tennis (if that's how one thought of it) might be unwise.  Anyway, I'd need to finish my semester first and then do prehab.

I already had a couple of trips planned for the early summer, to Stockholm in May and Israel in June.  These, I determined, were still feasible, meaning that I couldn't have surgery until the end of June.  But one thing I absolutely did not want to do was ruin my summer, when I so vastly prefer it to winter.  There was simply no way that I wanted to spend my favorite months of the year lying in bed and then hobbling around on crutches, rather than enjoying the outdoors.  But once it was September, I'd need to wait for fall classes to end, hence the target date of sometime this week.

I met with three surgeons, decided which one I preferred, and started rehab (or at the time, apparently prehab).  But I hadn't definitely decided what to do.  I'm usually decisive about choices that I face, but this time I kept wavering, not that it mattered immediately, as the "go" decision still lay several months down the road.

By late July, my physical therapist was telling me that I was close to being able to go back on the tennis court.  But I didn't feel ready until late August.  My first time out, hitting with a pro, I felt as if I was a million years from ever actually playing tennis again.  All I could do was hit the ball if it was drilled right at me.

By late September I was actually playing matches, which I now have survived for more than two months, pretty much at my old level (as to both good days and bad).  I even run down a lot of balls - I'm almost as mobile as I used to be, if I'm on my toes and leaning the right way, though less able to change directions or manage a cold start.  I try to be careful in a couple of ways (including how often I play), but so far, mostly so good.  I also can rush to cross streets when the light is turning, as I always used to.  I simply don't do red lights, if I can help it, but early on this caused knee buckling if I even dared to try.

Meanwhile, I've been living my regular life, apart from the nuisance of having to keep up the regimen of daily knee exercise.  My current project (due January 15, but triaged until now behind other, more pressing obligations) is writing a short chapter called "The Economics of Taxation" (not my choice of title) for a forthcoming Oxford U. Press volume, the Oxford Handbook of Law and Economics.  Not as much fun for me, perhaps, as writing a more creative and original paper, but incomparably preferable to lying on my back with painkillers and an ice machine.

UPDATE: Great article about ACL tears, including why they happen.  I'd been noticing that, in the NFL, there seem to be a few every week, while in the NBA point guards have been falling from ACL tears like flies.  Also exactly my experience that it's a "mind-body" issue - ACL tears happen because you're surprised (which requires that you be playing with an opponent, even if there's no physical contact) - you change what you're doing at the last second and thus are awkwardly misaligned at the moment of injury.  Then you feel the  pop, and it's welcome to the world of diminished performance and (at least initially) pain.  The one difference between my experience and that described in the article is that, as merely an amateur / weekend athlete, I could get back to an adequate physical performance level without the surgery - obviously not possible for an NFL or NBA player.
Posted by Daniel Shaviro at 3:32 PM 1 comment:

In today's Tax Notes (12/9/13, 141 Tax Notes 1007-1012), Martin Sullivan is kind enough to offer an analysis of the Senate Finance Committee discussion draft that "draws heavily from the work of professor Daniel Shaviro of New York University School of Law," in particular my articles on foreign tax credits.  I gather that Sullivan has not seen my (still-unpublished) book on international tax policy, which offers a comprehensive broader framework, based in part on those articles.
Posted by Daniel Shaviro at 2:18 PM 1 comment:

"I have supped full with horrors" 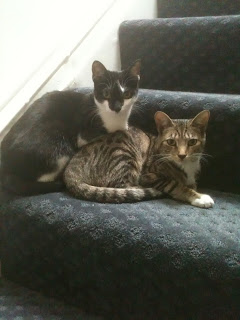 The title of this post is a quote from Macbeth - appropriately enough, since Macbeth is known to Bertie Wooster as the "cat chap" - reflecting that Jeeves had quoted to him the line where Lady Macbeth refers to "letting 'I dare not' wait upon 'I would,' like the poor cat in the adage."  The horrors of which I write here do indeed relate to a cat.

For the last 15 months, our household has been brightened by these two adorable little fellows, littermates whom we adopted in September 2012 at the age of somewhere between 6 and 8 weeks. In the picture, Sylvester is the one on the left, and Gary is on the right.  Among the rituals that they eagerly endorse (besides knocking things onto the floor, following us around the house if something fascinating, such as watering plants, is afoot, swatting at loose yarn, and playing vigorous rounds of Friskabout) is coming downstairs for breakfast, after having starved all night once their food from the evening was gone.

But yesterday, no Gary at breakfast or thereafter.  We didn't see or hear him, and couldn't find him anywhere.  We then recollected that we hadn't seen him the previous evening (which can happen with a cat - it's that air of mystery which they never entirely shed), and that there had been people in our house the previous day doing repairs, which the kittens hate (both the noise aspect and the strangers aspect).

Sherlock Holmes says somewhere that, when you have eliminated the impossible, whatever remains, however improbable, must be the truth.  We were struggling to apply this precept, the problem being that we couldn't distinguish the impossible from the merely highly unlikely.  Could he have gotten out of the house?  It didn't seem possible, but then again cats can have ways.  Had he found a hole somewhere (a radiator seemed to have one) and disappeared into the wall?  Were there human fist-sized openings and passageways behind the walls, which he might be able to navigate and then perhaps get lost or stuck?  Did he get sick or injured and hide?  If he was still in the house and conscious, why wasn't he scratching and meowing?

This went on all day, and it would be an understatement to say that there were long faces in the Shaviro et al household.  But then at around midnight, a family member heard some scratching and meowing sounds.  It turned out that he was in one of the drawers of a little-used dresser.  He is now out and about, and evidently none the worse for having spent perhaps as much as 30 hours there.  We, by contrast, remain a bit the worse for wear, our immense relief notwithstanding.

Remaining mysteries, which I don't imagine we will be able to solve, include (1) how did he get into the drawer, which one would have thought was closed, (2) how did it re-close once he was inside, and (3) why didn't he announce his presence sooner, especially once the workers had left.

But after spending a full day thinking we might never see him again, or that perhaps in a month we would detect a skeleton stuck behind the wall, we are not complaining.
Posted by Daniel Shaviro at 8:46 AM 3 comments: