I am also saddened by the recent death of long-time Joint Committee on Taxation staffer Mel Thomas. Behind a paywall in Tax Notes, Martin Sullivan has published a tribute that begins as follows:

It was 2 a.m. when Senate Minority Leader Bob Dole wanted details on what boats would be subject to the proposed luxury excise tax. Negotiations were touch-and-go on a $500 billion bill. Only leadership and one staff member were allowed in a small conference room in the U.S. Capitol. Fortunately, that staffer was Mel Thomas, an expert on tax law and on boating.

Whether with a powerful member or a wet-behind-the-ears junior staffer, Mel Thomas always had time to share the encyclopedic knowledge he had gathered through years of study and experience. Mel was a teacher. His classroom was Congress. If he had been a professor, he would have been one of the rare breed who combined a world-class intellect with five-star teaching reviews. His imposing fullback physique did not fool anybody for a second. This old-school gentleman had a heart of gold.
Smart as Solomon. Underpaid. Behind the scenes. Nonpartisan. Dedicated. Hardworking. Never forgot it was a privilege to be on the staff. When the real work began, you wanted Mel in the room.

I got to know Mel when I was on the JCT staff between 1984 and 1987. We didn't work on the same matters, but it was a small staff and he had a large footprint. He was beloved by staffers - but at times less so by lobbyists! - either despite or because of his demanding rigor and excellence. A favorite quote: "You're wrong, but go ahead."
Posted by Daniel Shaviro at 12:08 PM 22 comments:

I''m very sad to learn of the death of Ranjana Madhusudhan, former president of the National Tax Association, as well as Chief Economist for the New Jersey government, whom I always enjoyed seeing at the annual NTA meetings.
Posted by Daniel Shaviro at 9:59 AM 11 comments:

Courtesy of Leandra Lederman, here from youtube is the video of my Zoom presentation last Thursday regarding my new paper on minimum taxes. It includes a run-through of my slides for the talk.
Posted by Daniel Shaviro at 3:16 PM 153 comments:

Yesterday I greatly enjoyed virtually presenting, via Zoom, my new paper (soon to be posted on SSRN), What Are Minimum Taxes, and Why Might One Favor or Disfavor Them? The session was hosted by Leandra Lederman at Maurer Law School, and but for the pandemic I would have presented it there physically. Today, I was equally glad to present the paper virtually at the Critical Tax Conference, hosted by Neil Buchanan at U Florida Law School.

Although I like meeting in person with my colleagues at other schools when it is safe to do so, better Zoom than nothing. An hour from now, I will be attending my first-ever Zoom cocktail party, marking the end of the Critical Tax Conference's first day. I'm pretty sure it's BYO cocktail, as physical delivery by Zoom of actual drinks is still just on the drawing board.

Here is an abstract for the minimum tax paper:

The alternative minimum tax (AMT), a key and at the time widely lauded feature of the Tax Reform Act of 1986, soon fell into disrepute and was subsequently scaled back, to general approbation and relief. Yet in recent years minimum taxes have come back into vogue. For example, two key international tax provisions in the 2017 tax act (GILTI and the BEAT) had minimum tax structures, and the OECD has recently issued proposed guidelines for the design of a global minimum tax, meant for multilateral adoption.

In light of minimum taxes’ surprising return to center stage, this paper explores such issues as the following:

1) the purposive, technical, and semantic contours of instruments we call “minimum taxes,”

2) why a minimum tax structure matters – pertaining, for example, to the creation of clientele effects and discontinuous marginal incentives,

3) the lessons to be learned from the rise and fall of the AMT,

5) the design question of whether, if highly profitable companies’ financial accounting income were made tax-relevant, this should be done through a minimum tax,

6) how one might rationalize (or not) the BEAT’s minimum tax structure, and

And finally, courtesy of Leandra Lederman, here is a virtual snapshot of the Maurer session yesterday: 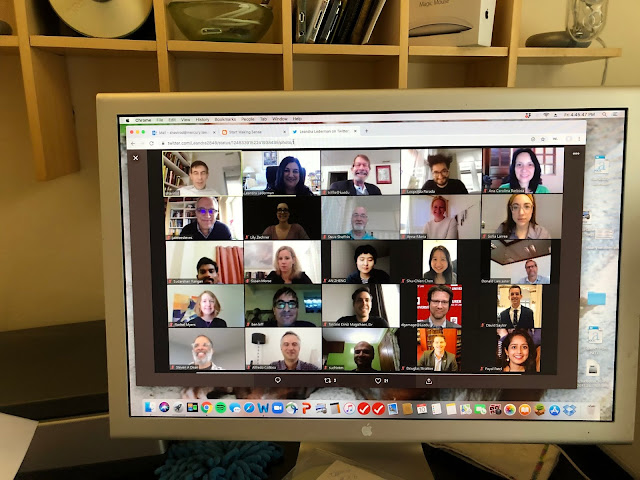 I'd still prefer a lower price (authors are that way), but the Amazon Kindle price for Literature and Inequality has been lowered by 25 percent.

BTW, here is the back cover blurb from Daniel Markovits of Yale Law School, author of The Meritocracy Trap:

"Literature and Inequality is an eye-opening and powerfully affecting book. By rereading literary classics through the lens of high-end inequality, and by emphasizing their fascination with the contest between patrimonial complacency and meritocratic ambition, Shaviro opens a new window into familiar texts. And by confronting us with the lessons of his readings, Shaviro compels a new reckoning with the rising high-end inequality and regenerated caste system that increasingly plague our own age."
Posted by Daniel Shaviro at 4:30 PM 12 comments:

Just to lighten the mood, here are a coupla pictures. The first is me doing some writing yesterday. I have a new project that's going well at the moment. No mask because it's secluded private space. 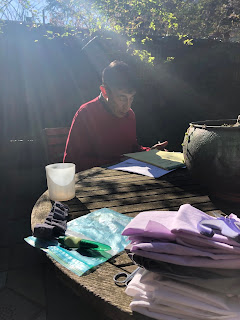 And this, taken from the files (it just happened to be on my laptop) is the roundabout that gets mentioned in Penny Lane. I took this photo some years ago, during a side trip in Liverpool while I was attending a tax conference in Oxford. This year's in-person conference, which I had planned to attend, has of course been canceled. Why are they so wrong?

I have been struck by the tendency of conservative intellectuals, including some I know (and am too fond of personally to rake over the coals in public) to get the pandemic so wrong. Non-Trumpists are included in this group; it's a more general ideologically driven myopia. They of course are going to want to forget it (and avoid learning from it) later on, but the lessons are worth considering even without any finger-pointing or shaming component.

Hostility to scientific (and all other) expertise, within the adjoining ideological swamp in which they swim, is one factor here, although some of these folks are genuine intellectuals. A second, of course, is reflexive anti-government sentiment, so that any sort of coordinated national response, especially at the expense of economic output of the sort that GDP measures, is immediately suspect. (Quick test: If, pre-Great Recession, you didn't believe in Keynesian policy responses to severe downturns, did you learn from that? Some did, e.g., Richard Posner, but others didn't.)

But another important contributing intellectual fallacy is over-estimating the extent to which relatively benign and sustainable equilibria will rapidly and spontaneously emerge in all "markets," including, say, the interaction between viruses (or other micro-predators - the particular substrate doesn't matter to over-generalizers) and their hosts.

Suppose, for example, that one has in mind the model of economic equilibrium in the market for consumer goods - Econ 101-style - along with the usual raft of assumptions suggesting that it will always spontaneously and instantaneously emerge in the absence of centralized interference, which of course is assumed, for its part, to be certain of miscarrying. (BTW, trained economists who actually understand economic theory in greater-than-Econ-101 depth realize that these models do NOT predict when or how fast equilibrium will emerge in multiply constrained real world conditions.)

Whether and when a relatively benign and sustainable equilibrium might emerge is really a matter of how the numbers play out in very complex and multifaceted settings where we don't know any of the inputs. But benign, sustainable equilibria don't always emerge, even in the very long term if too much gets destroyed along the way.

Consider the Black Death, American chestnut blight, Dutch elm disease, and the global overkill by hominins of large landed species that didn't coevolve with them. In each case, one who was sufficiently committed, intellectually and emotionally, to believing in the rapid, inevitable triumph of spontaneous order and the invisible hand would presumably "predict" that the runaway phenomenon will stop itself. And it is indeed true that some of the relevant forces will always be pushing in that direction. But those forces don't necessarily prevail in any particular setting or time frame.

Global warming is of course another example. Many of the same people who are embarrassing themselves with respect to the pandemic have likewise been doing so on climate change, apparently because their ideology demands that they predict that the benign (from our standpoint) feedback effects will overtake the adverse ones - although in fact it is purely a question of how particularized phenomena happen to play out mathematically.

Unfortunately, if the rapid emergence of (at least relatively) benign spontaneous order in all "markets" (defined as broadly as possible) is your religion,  then you are going to be very wrong sometimes.
Posted by Daniel Shaviro at 10:19 AM 25 comments: