From the pages of the Yale Law School alumni magazine 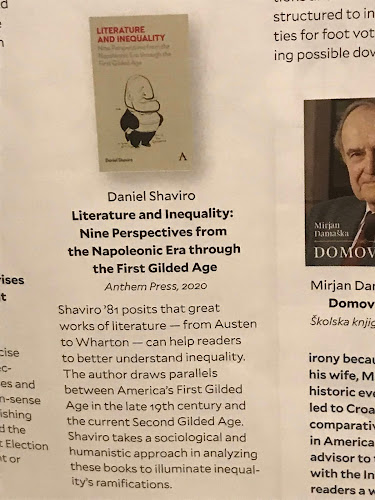 Trump won both decisions in one sense - due to his continuing opportunity to force delay, vital information that could shed light on his criminality and worse will remain secret, even from the New York DA, until after the November election.
But he lost both decisions in terms of the legal issues. This shouldn't be surprising, of course, since his legal position is so many light years beyond the pale of US constitutional norms. As the Supreme Court rightly put it, he is in effect claiming to be a King, despite two centuries of legal and political history to the contrary.
Given the egregiousness of his likely crimes and the already compelling evidence of them, it seems clear that the House of Representatives should be able to make a case for extensive discovery that no reasonable court, acting in good faith, could credibly rebut. (Which is not to say that no judges or justices will try.) But the time frame for this is long enough that it might not matter. If he stays in the White House post-election, it is not clear to what extent normal legal norms will matter. If he is out, this might be the least of his problems.
One odd feature of Trump v. Mazars that caught my attention is the following passage, which I have taken from the up-front syllabus of the decision:
"Historically, disputes over congressional demands for presidential documents have been resolved by the political branches through negotiation and compromise without involving this Court. The Court recognizes that this dispute is the first of its kind to reach the Court; that such disputes can raise important issues concerning relations between the branches; that similar disputes recur on a regular basis, including in the context of deeply partisan controversy; and that Congress and the Executive have nonetheless managed for over two centuries to resolve these disputes among themselves without Su- preme Court guidance. Such longstanding practice ' ‘is a consideration of great weight’ ' in cases concerning 'the allocation of power between [the] two elected branches of Government,' and it imposes on the Court a duty of care to ensure that it does not needlessly disturb 'the compromises and working arrangements' reached by those branches.'"
This is an extraordinarily, perhaps even willfully, blind thing to say when you have an administration that has, as its position, allowing no Congressional discovery whatsoever. In context, the rogue nature of the current administration is something that should be judicially cognizable. You can't reasonably defer to the political branches working things out when one of them has decided to act in bad faith and without regard to the Constitution, the principle of separation of powers, or 200 years of previously undisputed practice. The current administration makes no secret of, and leaves no possible ground for doubt concerning, its wholesale rejection of "compromises and working arrangements" that reflect the existence of coequal executive and legislative branches.
Posted by Daniel Shaviro at 2:10 PM 8 comments:

When the 2020 baseball season finally starts (i.e., if the pandemic doesn't stop it), there will be a new rule at the major league level, under which, for extra innings, each team will start with a runner at second base. The idea is to make scoring more likely, hence shortening the games that burn out teams' pitching staffs while also asking too much of the fans. (I certainly can't follow Mets' night games for very long, if at all.)

I'm not inherently against the new rule either on tradition grounds or because it's so arbitrary. To me, it's an empirical question of how it affects the fan experience of following the games. But in that regard, I wonder if it will backfire. We'll see.

One possibly interesting strategic element follows from the fact that the runner who starts out on second base is the one who made the last out in the previous inning. (Or his lineup replacement.) Suppose the Mets had a speedy outfielder batting in the ninth, with two outs, no one on base, and Wilson Ramos on deck. Would the other team consider walking the outfielder to pitch to Ramos, just so he could make the last out? He is said to be the slowest runner in baseball, so the idea would be to handicap the Mets if the game went to extra innings, unless they were willing to sub him out.

But on to the big problem. What worries me about the rule is that it might lead to boring one-run strategies. That is, have the extra inning's first batter bunt the free baserunner over to third, with the next one bunting him home. That would be little fun to watch if it happened too frequently. And when it did succeed, there would be two outs and no one on base, limiting further scoring and excitement.

Suppose the visiting team fails to score in the top of the inning, or scores exactly one run.  That would put a huge premium on one-run strategies in the bottom of the inning, such as bunt-bunt with the runner on second.

Again, it's an empirical question whether the new rule will backfire in this way. Good idea to try it out in a 60-game season, so it can be discarded or tweaked if it malfunctions.
Posted by Daniel Shaviro at 11:20 PM 9 comments:

I recently posted a link to the sessions that 11 of us (i.e., US tax law professors) held recently at a Critical Tax Conference that took place via Zoom (rather than in Gainesville, FL) once the pandemic got in the way. But now, courtesy of the Tax Prof blog, I can offer links just to my session (here), or to each of the 11, now available separately (here).
My minimum tax paper, which I discussed at the session, is available here.
Posted by Daniel Shaviro at 4:10 PM 6 comments:

I've listened a few times to the new Bob Dylan album, and I do think it's quite nice in its mellow way. But today, while we were out for a drive, we were just a couple of minutes from our destination when it ended, so I put on "All I Really Want to Do" (written in 1964 and released on Another Side of Bob Dylan in 1965).
My gawd, what a difference. That song, one of his really great ones, is so cracklingly alive - funny and sarcastic and sincere and ambiguous and powerful. He playfully gives this astonishing catalog of all the things you shouldn't do with or to a romantic partner, including playing multiple types of head games. It's jokey and rhymey, but at the same time a brilliantly assembled and variant list.
Then the classic ending about not wanting to make her to "see like me, feel like me, or be like me" - which of course is also so right. But he laughs, which has always conveyed to me his sense of the utter weirdness of anyone being like Bob Dylan. But throughout, the sarcasm and sincerity are so inextricably mixed, including the obviously suspicious come-on inherent in "All I really want to do, is, baby, be friends with you." Yeah right. The ambiguity is a large part of what makes it so great. (Missing, of course, in the Byrds' pretty and tuneful but shallow version.)
It is too bad for other artists, in a way, that we listen to Dylan today because he did such great things more than 50 years ago.
Posted by Daniel Shaviro at 7:56 PM 3 comments: