Gary's tired, but it's only because he's been working so hard. 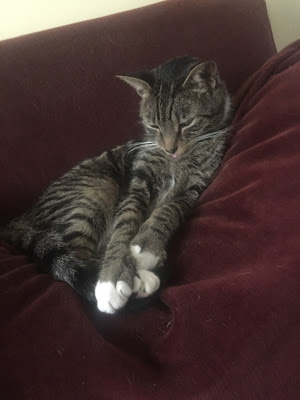 Posted by Daniel Shaviro at 4:53 PM No comments:

Worst proposal in the history of the U.S. federal income tax?

With apologies for the hyperbole, I do think it's possible that the special 25% passthrough rate that the Republicans are eager to enact might be the single worst proposal ever prominently made, in the history of the U.S. federal income tax. Certainly I can think of none close to being as bad in the last 30+ years when I have been an observer.

It combines inequity with inefficiency in a manner that is really hard to top.  Let's start with the inequity. It ensures (and this is evidently its central purpose) that people like Trump and the Koch brothers will pay taxes at a lower marginal rate than you and me.  This is both horizontally and vertically unfair. Lower rates for the super-rich than the upper middle class. Express regressivity. This is why I've in the past compared it to the gabelle - the hated salt tax in pre-Revolutionary France from which the nobles were exempt. Here, the equivalent to the gabelle is the excess over 25% that only employees and those in service businesses, as distinct from super-rich business owners who are able to blend their labor income with capital income, are required to pay.

Making this inequity worse, it's precisely targeted, almost like a laser, in order to make rising high-end inequality as much worse as possible.  Consider this article, Capitalists in the 21st Century (by Smith, Yagan, Zidar, and Zwick), which as it happens I will get to see being presented at Columbia Law School next week. Here is the paper's abstract:

"Have passive rentiers replaced the working rich at the top of the U.S. income distribution? Using administrative data linking 10 million firms to their owners, this paper shows that private business owners who actively manage their firms are key for top income inequality. Private business income accounts for most of the rise of top incomes since 2000 and the majority of top earners receive private business income—most of which accrues to active owner-managers of mid-market firms in relatively skill-intensive and unconcentrated industries. Profit falls substantially after premature owner deaths. Top-owned firms are twice as profitable per worker as other firms despite similar risk, and rising profitability without rising scale explains most of their profit growth. Together, these facts indicate that the working rich remain central to rising top incomes in the twenty-first century."

These are exactly the people who would get the 25% passthrough rate. Hence my view that this proposal is laser-targeted to increase high-end inequality as much as possible, by offering a special low tax rate to the exact people whose rise is causing it.

What about efficiency? I would call the proposal social engineering or targeted micromanaging of the economy, attempting to override the signals of the free market regarding pretax returns, except that would be giving it too much credit. Aiding the coal industry would be an example of that, but here I see no ghost of a rationale apart from cliches about "entrepreneurship" (which can be countered by noting that, when people are earning rents, that should make them less tax-sensitive).

Here are a couple of simplified examples showing how this provision inefficiently tampers with market outcomes, and leads to the diversion of effort and investment out of the most productive channels.

Example 1: Suppose I could earn $1 million as an employee, and pay tax at 35%, or $900,000 as a self-employed passthrough owner, and pay tax at 25%. If markets set prices properly, the former is more socially valuable than the latter. But as an employee I'll end up with $650,000 after tax, whereas as a self-employed passthrough owner I'll end up with $675,000. So the special tax break steers me into the less productive activity.

Example 2: Suppose that the passthrough rules prevent people like me from just using S corporations and the like to convert our labor income into passthrough income that qualifies for the low rate. These rules might require that capital is being sufficiently used in the business.

Or I can (b) mix up the capital with my services, even though this puts me in a worse business that earns less money - say, $925,000. In effect, the capital has a negative rate of return. Given its effect on the bottom line, one could think of it as having been invested at a negative 7.5% rate of return, rather than positive 5%. But it served to allow me to bring my labor income into the low-rate passthrough regime.

But at least I will be making America (and high-end inequality) great again.

The proposal amounts to fining people for being employees and working in service businesses. This is mindless and senseless at best, combining inequity and inefficiency in a perfect storm of disingenuousness by the self-interested proponents.

UPDATE: It's true that lowering the corporate rate to 20% would incline one to think about the relative taxation of alternative business organizational forms. But:

(1) There is a second level of corporate tax.  And if we are talking here about people who will organize businesses, to which they supply their own labor, either as passthroughs or via a C corporation, then we are not talking about all the corporate shareholders who, as discussed in recent work by Austin and Rosenthal, are tax-free with respect to dividends.

(2) The proper solution to that problem is to address misuse of the lower corporate rate to benefit owner-employees who cause the entities to underpay their own salaries because they benefit from stock appreciation anyway. There are ways of doing this (e.g., Kleinbard on the dual income tax aspect of his dual BEIT proposal).
Posted by Daniel Shaviro at 11:18 AM No comments:

Warning: conceptual hipsters are on the loose in my neighborhood

Here is the evidence: 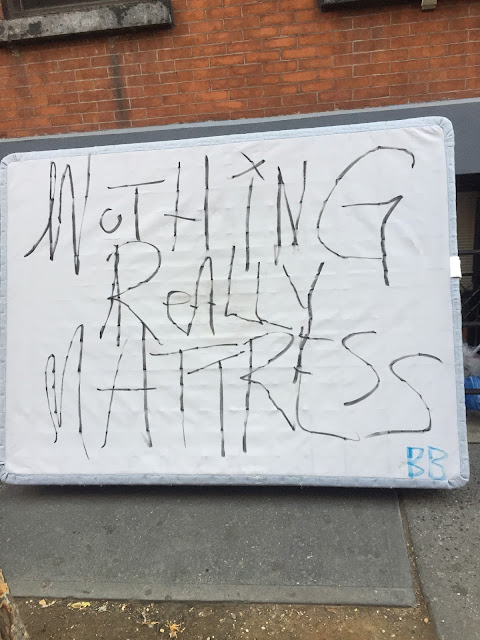 in case the photo doesn't make it clear, this actually is a mattress, which someone left propped upright on a street corner.
Posted by Daniel Shaviro at 8:39 AM 1 comment:

Last Friday, I returned to NYC after almost a month abroad.

Most of my time away was spent in Berlin, where I was a Research Fellow for 3 weeks at NYU Berlin. My professional activity there consisted mainly of working on a new article draft on international tax policy.  Then I spent a week in Vienna, where I taught a mini-course on International Tax Policy for graduate students in Vienna University's doctoral program in international business taxation (DIBT).  Side trips to Amsterdam (for a public speaking event) and Ljubljana (for enjoyment).

Although I enjoyed the trip, it's nice to be back in NYC, which remains my favorite city apart from its winters.
Posted by Daniel Shaviro at 1:40 PM No comments:

I have been reliably informed (and then was able to confirm for myself online) that the Ninth Circuit oral argument in the appeal of the Tax Court's misguided Altera decision is taking place this Wednesday.  I gather that Susan Morse and Steve Shay will be blogging about this, and I'll duly post links thereto.

I previously discussed the Altera decision here and here. Stripped to its substantive (as opposed to administrative law) essentials, it's a case in which the Tax Court ruled that an indisputably correct Treasury regulation, to the effect that the bulk of compensation costs in a cost-sharing deal between related parties should be included in the formula even if they're structured as incentive compensation, was arbitrary and capricious, hence an abuse of discretion. In effect, it's an abuse of discretion to say that 1 + 1 = 2, unless one spends pages of regulatory preamble explaining why taxpayers were incorrect when they filed briefs at the notice and comment stage arguing that 1 + 1 = 1.

The Tax Court relied upon aspects of true arm's length deals that had zero pertinence or relevance to related party paper-shuffling agreements, and accepted expert testimony to the effect that incentive compensation that in fact is worth millions of dollars should be viewed as having a cost of zero.  Here's hoping that the Ninth Circuit straightens things out.

UPDATE: Here is the link for the Morse-Shay posting, further explaining why the Tax Court so clearly erred in striking down the regulation at issue in Altera.

Leandra Lederman adds her comments here.
Posted by Daniel Shaviro at 1:55 AM 1 comment:

Taking time off from my Berlin stay to enjoy a vacation weekend in Ljubljana (pronounced Loobleeyana), I kept busy by testing my new superpowers. 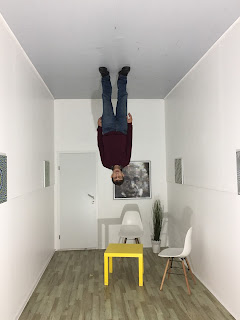 I also got to practice my famous John the Baptist impression. 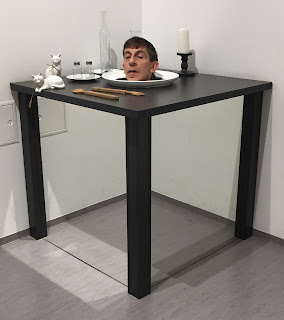 Unfortunately, neither special talent seems to have survived my return to places further west.