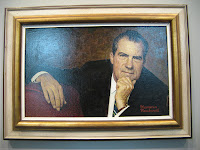 My family went site-seeing in Washington D.C. while I was going to a conference at the Washington University in St. Louis. Conceptual togetherness even when apart? They returned with this lovely photo, which they rightly surmised that I would enjoy.

On the same theme, I got to talk while at WULS with a former senior economist in the Nixon and Reagan Administrations, a very nice and interesting man. At lunch one day, I couldn't resist asking him about Nixon. He said Nixon was exceptionally intelligent but a strange person with an overwhelming aversion against ever taking the simple, direct, straightforward route to any objective. For example, if there was a public document to release, Nixon would insist on leaking it somehow as a means of rewarding friends in the media or punishing foes. Reagan, he said, was very pleasant but clearly regarded everyone working for him in the government (even people as high up as Jim Baker) as hired hands - you could see the contrast when Jimmy Cagney and Patrick O'Brien came in for a White House film screening and were greeted very differently.
Posted by Daniel Shaviro at 12:33 PM