Our new cat Seymour still hides out a lot and tends to run away during the day. But in the middle of the night at some point he’ll jump on the bed, start purring and nuzzling, rolling on his back to be petted, etcetera. Then by morning he is gone (although he shows up again to be fed).

Probably just the adjustment period, but while it persists I’m reminded of a story that Alfred Hitchcock once told when he was a guest on a late night talk show (presumably Carson), some time in the mid-1970s.

The story concerns a young man who is lost in the desert, and convinced he is about to die of thirst and exposure, when he sees a lovely villa in the middle of nowhere. He is graciously welcomed there and given a place to stay while he recovers. His host is an older man who lives quite comfortably with no one else in sight except for an attractive daughter (and perhaps servants?). The daughter is very chilly towards our hero, and will scarcely talk to him. But every night there is a knock on his door. From the voice it appears to be the daughter. She comes in and spends most of the night with him, but insists that he not turn on the light. Then the next morning, when he goes to breakfast, she is as remote as ever, until the next night when it happens again.

When the young man has recovered and is ready to leave, he asks his host why they are living in such a remote place, with no one around. “It must be so lonely for you and your daughter,” he says.

“Daughter?” the old man replies. “I actually have two daughters here. They are twins. You haven’t seen the other one because she has leprosy.”

And on that note Hitchcock took his leave.

I’m pretty sure Seymour doesn’t have a leprous twin in our house, with the same long body, absurdly long tail, carpet-like gray fur, and white boots. But for now there’s a similar disconnect between his daytime and nighttime avatars.

UPDATE: Seymour is starting to relax and get friendlier during the daytime. But it's a good thing he isn't a Seymouria (early Permian reptile), or he would look like the one on the left

rather than the right. 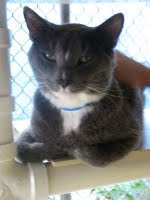 FURTHER SEYMOUR UPDATE: Seymour appears to have established a modus vivendi with Ursula, the sweet-tempered and moderately shy female. Buddy, our crazed male incumbent, has been having loud yowling contests with Seymour in which they swat at each other but haven't gotten into actual fighting. They're evenly matched and appear to be a couple of big sissies (and thank goodness for that) behind the macho posturing, each desperate not to appear vulnerable. A couple of peaceable nose sniffs recently indicate we may be headed in the right direction.
Posted by Daniel Shaviro at 10:37 AM

In case you are interested, this was originally a Roald Dahl short story called The Visitor, and a good one at that!

Thanks, Paul. On reflection, it certainly sounds like Roald Dahl, but I didn't know that.