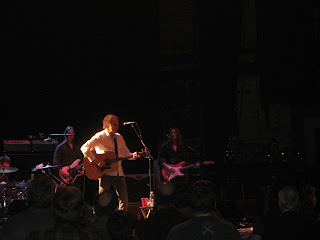 Last night, after a very full day devoted to intensive labor on my Senate Finance testimony for next week plus sundry internal NYU matters, I returned home feeling a bit beaten down ("It's hard work," as Bush would say) but with an evening event on my schedule - a Ray Davies concert at the Beacon Theater.

How au courant to be going to such a concert, some of my NYU colleagues said. Not that I was trying to be. Better just to rest after a day of long hard slogging, if that were the goal. But another colleague, who actually is somewhat au courant, used instead the word "old-fogeyish" to describe going to such a thing. (Had he seen the audience in the orchestra section of the theater he would have felt entirely vindicated.) But my true reason for going was that I hoped the concert would be interesting and fun. It was - and I felt really revived afterwards.

The biggest surprise, though I suppose it shouldn't have been, was what a showman, as well as a hungry sponge for audience acclaim and approval, Davies proved to be. Also seemingly a genuinely nice man, although that isn't the standard formula for a rock 'n' roll lead singer (and on-stage appearances can surely be deceiving). There's so much depression, scorn, and paranoia in some parts of his songwriting canon that I was expecting something a bit different. (Maybe I was succumbing as well to the romantic myth of the lonely, suffering artist.) Obviously lots of other parts of his canon express something very different than this (e.g., Days and Waterloo Sunset). But one could see how integral to his overall set of drives were his fifteen plus years (from the early 70s on) of playing dreadful arena rock so as to "give the people what they want" (as one of his album titles put it).

So there he was, actively seeking sing-alongs on all the old Kinks hits, coming back on stage when the show seemed to be over because he wanted to do just one more number, then doing another one after that, thanking the crowd, mourning the Kinks, throwing repeated verbal bouquets to the guitar playing of his estranged brother Dave, praising his current band and asking if we liked them too, etcetera.

More needy than smarmy, however. And he's still a great singer as well as one of the premier rock songwriters, with his trademark plaintive but indelible minor-key hooks that only the Beatles could really do as well. (That plus the articulate lyrics, ability to capture moods, and the memorable power-chord runs that others such as the Who stole from him.) No other songwriter from that era has come close to his recent writing except for Dylan, who still sets his own standard but really just on Modern Times.

Almost all Kinks in the first set (although two from his first solo release), then after the intermission five or so cuts from the new album starting out acoustic then returning to the full band, and finally a mix of old classics with more new stuff. Almost all of his Kinks material was from the band's first 3 or so years. Nothing from Village Green unless you count Days (which is from the same era and is on the extended reissue but not the original album). Only 3 songs from the 70s and 80s, which (Lola excepted) was a mercy. And the new material really did stand up to the old although perhaps not quite as rousing.
Posted by Daniel Shaviro at 8:44 AM

A wonderful concert. Hadn't been at one for two or three decades....but seeing that name on the marquee I couldn't miss it.

And I'm so glad I didn't. I echo most of your comments. I loved how he seemed to finish a song, only to encourage a sing along to go back into the song. A neediness, perhaps, but one that was so welcome to me.

I've been a little down lately, suffering somewhat from bad health and growing older. But seeing Davies was better than Zoloft, Celebrex, or holistic mumbo-jumbo.

It was Chicken Soup for my soul. I still have all the albums, even English versions. Sitting there, or by the end, standing, singing in my tone-deaf glory, along with my wife, it made me not only nostalgic, but optimistic. Biased slightly to early stuff (no problem for me) he threw in the obvious, but thank god I could hear "Waterloo Sunset" once again. Tearing up, I haven't felt this happy in years.

great show...was hoping he'd play picture book but i enjoyed the songs, even the newer ones i didn't know. i had only seen ray once before, during an abbreviated acoustic set a few years back at the tibet house benefit at carnegie, so it was exciting for me to see him rock out with a full band and electric guitars.

i'm not sure if i'd categorize his call & response routine with the crowd as needy, i think he's just trying to entertain and it's a guaranteed way to get the audience going.

I also thought it was a wonderful show. However, I don't share many people's disdain for his 70's and 80's work. While not everything was wonderful, and some of it a tad bit pandering, I am quite fond of many tracks from those eras. Some of the tracks show a craft and dexterity with the language of musical emotions that is beyond, or at least equal, to many of the songs Davies wrote in the 60's.

You'll find many of The Kinks later tracks in my regular rotation... "Missing Persons" "Good Day" "Do It Again" "Now and Then" "Looney Balloon" "Scattered" "Phobia" (yes, phobia) "How Are You" "Think Visual" "Not Far Away" "Voices in the Dark" "Where Oh Where Is Love?" "Brother" "Jukebox Music,"... They're all wonderful songs in my opinion, and I'm sure I'm forgetting a bunch more.