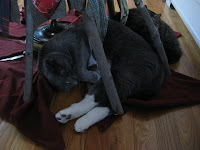 Teasing though affectionately meant new nicknames are OK, I figure, when you give them to a cat. A person's feelings might be hurt, but the cat doesn't know.

In this spirit, we've long, for obscure historical reasons relating to my first-ever cat, the fondly remembered Puddin', referred to all of our cats as "bunnies." Part of the idea is that one imagines they'd be insulted by, or even indignant about, the label if they were still cats but also had human cognitive attributes including language capacity. It doesn't quite match what one imagines is their self-image as apex predators in the world of creatures half or less their size.

In this spirit, it recently occurred to me to accuse Seymour of actually being a squirrel. He's certainly gray enough (in the fur and flesh, perhaps a bit lighter than he looks in this photo), and arguably also un-fierce enough, albeit not active or frenzied enough (he's generally quite serene).

The next step was to dub him Rocket J. Squirrel, this being the full name of Bullwinkle's smallish flying superhero companion. As you can see from this look at Seymour pursuing his favorite activity, rockets are not exactly the first thing he brings to mind once he's had his morning meal.
Posted by Daniel Shaviro at 9:16 PM