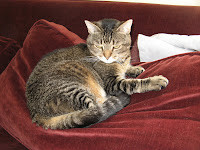 One thing about cats, if you have a typical human lifespan and your norm is to have 3 cats in the house, you will repeatedly experience their mortality, which is not pleasant (although the journey is still very much worth it as a whole).

Today Ursula died of kidney disease. There's an element of relief to this, because for the last few days we had been operating a hospice. It was horrible to see how gaunt and skeletal she looked, and how inert she was becoming. By the last few days (though not before that) her quality of life appeared clearly to be approaching zero. But at least we had 9 good years with her first.

She first got kidney disease, from an infection, about 2 years ago. She was briefly at death's door, but we got her restored with antibiotics, IV fluid for a week, etc. Then she was fine for a while, until a more recent stint at the vet at which it became obvious that her time was growing short. But she still had a couple of good months after we took her back home - although I don't think she much enjoyed the water shots that we gave her nightly. Finally in the last couple of weeks she sank fast. She stopped eating a few days ago, stopped using the stairs shortly after that, and today, I suppose mercifully, her body completed its shutdown.

An extremely sweet-tempered animal, known (among other monickers) as Ursee, the Lovely One, Ursulina, Princesska, and the Little Gal. Spirited although small, and the much larger Seymour (who is a peace-lover) would let her shove past him to eat at his food bowl. She didn't much like people whom she didn't know, but when she decided you were OK, you would feel really honored by her trust, affection, and regard. Not much for being picked up, but she loved being petted while on the ground, and would purr loudly (as well as fluttering) and groom you back, at least if you were on her Special Friends list. I often used to say that I wished I could get her to write me a letter of recommendation that I could present to other cats, stating "This one's OK," as I knew that was how she felt. She was also a very clever little gal - remarkably astute, for example, in divining when we were planning to pack her up for an unwanted ride in the car.

Look at the markings. She had great stripes. We adopted her at a shelter, ostensibly as just another brown tabby, but she was a dead ringer for a breed we saw in a book, called the Wild Abyssinian. Very smooth and silky soft fur. So long as you were not a mouse, she was a friend worth making and cherishing.
Posted by Daniel Shaviro at 9:23 PM