I once (as an adult) read The Wizard of Oz, which (as books can be) is fuller than the movie, but  you can also see that the 1938 filmmakers did a great job of compressing and tightening the plot to increase its dramatic impact.  Then I read Book 2 (I haven't read the other twenty or so), which also was fun and had a memorable character called  the Hungry Tiger.  Per Wikipedia:

The Hungry Tiger is a massive beast who is friends with the Cowardly Lion. He is always hungry no matter how much he eats, and longs to eat a "fat baby," though he never would because his conscience will not allow him to do so. He asks Nanda for permission to eat her and when she declines, he asks for a large quantity of beefsteaks, potatoes, and ice cream. He wishes that a dentistcould remove his appetite. At the banquet in the Emerald City at the end of Ozma of Oz, he acknowledges that he is finally full.

My memory of the Hungry Tiger, from Book 2, is that he is always saying to people: I'm so hungry I almost feel like eating you, but what would be the point, I'd just be hungry again in an hour anyway.  This in turn now brings to mind Buddy - the fellow shown here below - although he is fortunately far too small to think of us as food, other than as its suppliers via the crunchies we give him.

The thing about Buddy is how opposite in temperament he is to the Hungry Tiger.  Even if he had human-like anticipation and foresight, he would NEVER fuss along the lines of "What's the point? I'll just be hungry again soon."   He is far too buoyant and (if one can say this of a cat) essentially optimistic to despond like that - even as he gets older and creakier, and thus generally starts to feel much worse physically.

So he'll whine for food if he thinks it might work, even if you just fed him five minutes ago.  But, unless he's exceptionally hungry, if it doesn't work he just figures: That's fine, plenty of other nice things to do (such as going to one of his favored napping spots).

Whenever I get agitated about something, say about the election, I realize what a valuable lesson about temperament and mood one could try to learn (if such things were learnable) from Buddy. 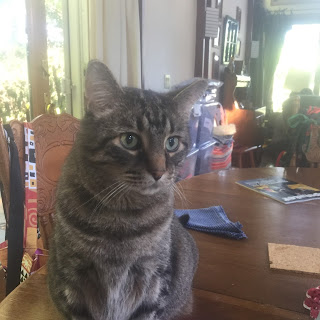 Posted by Daniel Shaviro at 8:58 AM

When you're hungry you can do a lot. It's necessary in different spheres of life. For example, it can help you struggle to get the desired job. You need to show yourself as best you can. There are different ways to do it, one of them is a resume (you always can get help https://master-resume-writer.com ) Resume is your portrait. It must be made perfectly.