I am a fan of Branko Milanovic's work on global income inequality, including his most recent book, about which I've written a short piece that will be appearing on Tax Jotwell at some point soon.  (It was supposed to appear in June, but they have a publishing backlog, as lots of tax folk have agreed to contribute annual short features.)

Anyway, here is a very interesting graph that Milanovic recently posted.  It's called "Cumulative real income growth between 1988 and 2008 at various percentiles of the global income distribution." As you can see, it gives insight into relative, as well as absolute, changes over the covered period at different points in the overall global distribution.  A key reason why the 10th to 70% percentiles beat the mean rate of growth is that many of the world's poorer (if not poorest) countries, circa 1988, have done so well.  (Absolute gain even at the very bottom, but much less than for people somewhat above that range.) Also much faster than average growth at the top, due to what one might call the "Piketty story."  And much worse results for the 70th through 90th percentiles globally, indeed with not all levels having experienced net positive growth at all, reflecting the other big part of the "Piketty story." 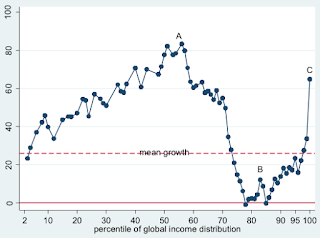