If only Descartes had met him

Sylvester, who nearly died this summer of a thymoma (along with a nearly disastrous general anesthesia episode that left him blind for 2 days) is now, many weeks post-surgery feeling well enough to meow plaintively, endlessly, and if I dare say so a tad annoyingly for food, to be followed by more food (perhaps more than his stomach will accept in so short a period).

He's so expressive of his often churning inner states that I'm sure Descartes would have realized how wrong he was to think animals are unfeeling automata, if only he had met the little fellow. 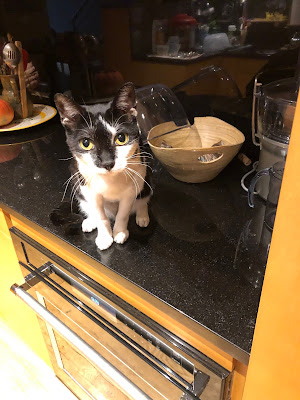 Posted by Daniel Shaviro at 8:42 AM

To know more about Chief Dr Lucky you can visit his website (https://chiefdrluckyherbaltherapy.wordpress.com/)

A friend that suffered from Herpes and was cure with the help of this great herbal doctor Chief Lucky so i decided to contact him for help in getting rid of my families genital herpes virus 1/2 which i did and all i was told to provide was just some useful information and some materials used in preparation of the natural cure and that i did and now i am the happiest person on earth because i am writing this testimony of mine with joy and happiness in my heart to the whole world to know that natural remedy is real because i am a living testimony of Chief Lucky traditional herbal cure and i want you all to contact Chief Lucky via his email: chiefdrlucky@gmail.com or WhatsApp him +2348132777335 am sure he will help you too.