In my prior post I offered background concerning retrospective income taxation, as set forth in prior work by Alan Auerbach and David Bradford.  This brings us to the twist that Kwak's paper offers.  Again, under the retrospective income tax one uses two pieces of information, the amount realized upon selling an asset and the holding period, in order to impute its value throughout the entire holding period, based solely on working back from the normal rate of return, and without regard to the actual cost basis.  So one ignores the actual gain or loss, for reasons detailed in my prior post (and pertaining to the avoidance of lock-in, the assumption that actual risky outcomes can be disregarded, and restriction of the method to "arm's length" asset acquisitions).

In the wealth tax context, however, one is using the assumed value in prior periods NOT to determine how much income was fictively realized in each period, but rather to devise an annual measure of the taxpayer's wealth.  This causes the same method to have, in some respects, opposite consequences. 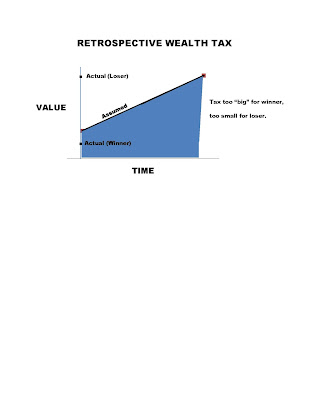 Now what happens to actual winners and losers, relative to the scenario where value actually had equaled the assumed amount each year?  The answer is, it reverses relative to the retrospective income tax case.

In the new scenario, the winner is over-taxed for the period in which value has not yet jumped from the actual line to the assumed line.  That is, she pays a larger retrospective wealth tax than she would have paid, if it had been possible to measure value accurately each year.

By contrast, the loser is under-taxed for the period, relative to "accurate" wealth taxation, for the period before value dipped to that shown by the Assumed Value line.  She would have paid more wealth tax in those years than she actually does, had we been able to measure asset value accurately.  Wealth taxes generally don't give you a refund for past years just because you experience a subsequent loss.

A few points about this.  First, it means that applying the method to non-arm's length assets is feasible.  It doesn't result in wiping out the bulk of tax liability for successful entrepreneurs such as Mark Zuckerberg.

Second, it does mean that the tax hits the upwardly mobile relatively hard.  They would have paid less under a "true" wealth tax.  This arguably targets upward mobility a bit more than proponents of wealth taxation, based on concern about high-end inequality, might actually have wanted to do.  It depends on how you think about the issue.  The likes of a Thomas Piketty, who particularly despises rentiers (as distinct from my preferred opposite term, "arrivistes") for reasons that link normative / meritocratic beliefs re. distributive desert with empirical beliefs regarding the effects of upward mobility, might consider this misdirected.  So might someone who felt entirely neutral as between rentiers and arrivistes, and who wanted a wealth tax to bear on them equally (as measured based on actual annual wealth).

Third, the "over-taxation" of entrepreneurs / arrivistes may be diminished under one particular set of views.  Suppose one thinks that these individuals likely or generally had valuable human capital, implying high expected future earnings, even before they got around to using this human capital to create commensurately valuable financial or other capital.  And suppose one believes that human capital should, insofar as it is feasible, be treated like other capital (including for purposes of the wealth tax).  Then one may espy less over-taxation of the big winner than there otherwise had seemed to be.

Note, however, that there may be a risk story here beyond that which we would assume in the case of arm's length asset purchases.  How likely was Mark Zuckerberg to succeed as vastly as he did?  Suppose he was one of 10 people with equal chances of making it that big, and that he just happened to beat out the other 9 by luck.  Due to its involving human capital, this was a non-diversifiable risk.  So the "true" picture, defined in terms of including human capital (at actual contemporaneous values in the wealth tax base, might still have involved his paying less tax than he ends up paying.  But at least we're "over-taxing" the winner, rather than the relative losers, and thus providing insurance rather than anti-insurance.  Presumably the main issue raised by this "over-taxation" goes to incentives, rather than distributive desert, but one might question how much this is likely to matter.

Fourth, the optical problem that the retrospective income tax raised - taxing the fictive gain of someone who actually suffered a loss - no longer arises, at least in the same way.  It's true that someone who sells property at a loss is immediately hit up with a wealth tax liability, but this reflects the value that she actually received from the sale.  Wealth taxation is based on value, rather than changes in value

Fifth, while one still may want to ask what follows from viewing risk more realistically than the manner in which it's treated by the underlying model, at least one is "over-taxing" winners and "under-taxing" losers, rather than the other way around, causing the system to provide insurance, rather than anti-insurance, relative to the true annual wealth tax.

Despite all this, I am skeptical that the proposal is going to end up on The List.  Plus, I might be skeptical about it, compared to some of the possible alternatives, even if was on The List.  Nonetheless, it offered an interesting and illuminating thought experiment.

The paper also raised various other interesting issues.  For example, how feasible is it to apply graduated marginal wealth tax rates?  This requires looking back to all the past years whenever an asset is sold?  Is the tax likely to be constitutional, even if a standard wealth tax would be treated as unconstitutional under authorities pertaining to "direct taxation" and apportionment between the states?  What tax instruments should it be paired with?  (E.g., a progressive consumption tax?)  If one agrees with the paper - as I do - that, under the proposed system, one should also treat gifts and bequests as realization events, how well will the two methodologies - backwards imputation and valuation without the benefit of a sale - coexist with each other?  But given the length of this post along with the prior one, perhaps that is best left for another day that might itself be indefinitely deferred.
Posted by Daniel Shaviro at 3:23 PM