Time out for a cat picture 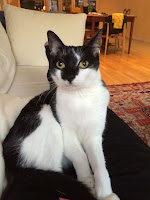 This is such a good picture that I couldn't resist posting it.

Though we named this little fellow Sylvester when we adopted him (with his twin brother Gary) at the age of about 6 weeks 3-1/2 years ago, you can see why our initial name for him was Harry Potter.  The lightning-shaped mark helped to distinguish him from his two black-and-white siblings.  (Gary and one other were the gray-brown tabbies, presumably from a different dad if I correctly understand mixed fatherhood among kitten siblings from a single litter.)

He is one of the most vocal cats I've ever known, and likes everything except for loud noises, car rides, and all strangers.
Posted by Daniel Shaviro at 11:51 AM